Martin ”Mander” Ander (b. 1976) is active as an illustrator and graphic designer, with roots in Stockholm’s graffiti- and skateboard scene. Today he lives in Gnesta and works internationally with skateboard design as well as illustrations for books, ads, posters and album covers. Martin has done illustrations for artists such as Håkan Hellström and KRS-One, and American companies such as Moog Music and Flip Skateboards. In 2009 he was placed third in the international competition “Best Art Vinyl” for his iconic album cover to Fever Ray, and in 2015 he was selected as Designer of the year on the Swedish Skateboard Gala. In 2018 the book Ouff! Mander selected works was released, which discusses his original artistry.

Martin Ander’s maximalist imagery is characterized by distinct lines, clear colours, retro-romantic debauchery and layers of subcultural references. The illustrations are always on spot and masterfully designed. The address is available and direct, while the vast details and surrealistic angels of approach make the experience immerse and keep the viewers attention maintained. Aside from punk-, graffiti- and the skateboard culture’s graphic and aesthetics, he mentions the comic book MAD, the artist Hans Arnold and the 1960s underground artist in the USA as sources of inspiration.

The exhibition at Teckningsmuseet will show you selected works from Martin Ander’s versatile career. You will, among his art, see skateboards, books, packages, tour posters, album covers, and not least the original of many of his drawings. 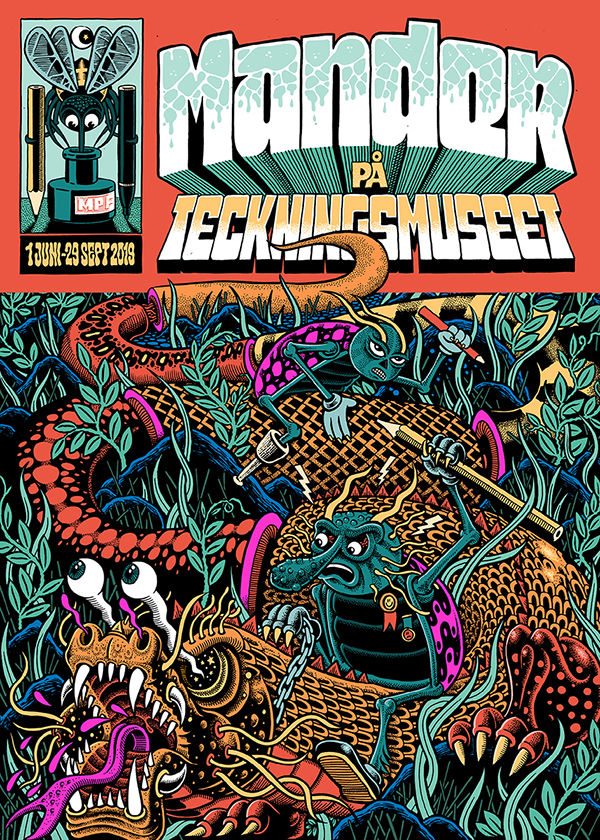